Since its opening in 1986, Manta Ray Bay Resort & Yap Divers has been at the forefront of sustainability in the diving industry and Bill Acker has been reducing the carbon footprint of his operation since its inception. Today is no different and the changes keep coming.

Bill was among the first dive shops in the world to switch the entire fleet of dive boats from 2-stroke to 4-stroke engines. When opened in March of 1990, the Manta Ray Bay Hotel used solar for all its hot water needs. In early 2013, solar voltaic panels were installed on the roof to produce as much of the resorts’ power as space would provide. That project has been expanded many times and the inverters used have been upgraded to the latest available technology. The result is that today, the resort produces over half of its power via sunlight.

Throughout the years we initiated several ecologies and marine environmental education programs and have teamed up with NGOs around the world to facilitate scientific research on manta rays. Bill Acker, founder, and owner of the Manta Ray Bay Resort & Yap Divers is passionate about ocean conservation and has taken a personal frontline position in the diving world by creating and promoting conservation and ecology educational events in Yap. The manta presence is so strong that Yap State is a field research site for the Manta Trust Organization. Our rays are being identified, measured, and indexed in a custom database for the conservation of all Micronesian manta rays.

Thanks to the Manta Ray Sanctuary program, started by Bill and backed by the State Government, all big animals benefit from habitat protection. A Yap state law enacted in 2013 protects sharks, whales, and dolphins. This shark sanctuary has been added to the world’s first government established Manta-Ray Sanctuary established with Bill’s help in 2008. Yap has led the world in setting aside 8,243 square miles comprised of 16 islands and atolls and 145 islets for conservation. In 2019 we partnered with the US-based Shark Conservation NGO in an educational program for high school students on Yap teaching the students about sharks and their importance for the ecosystem.

“Plastic less” is our motto when it comes to contributing to the use of more sustainable products to pack and serve our food and drinks. Wooden chopsticks, paper drinking straws, and reusable bento boxes for our dive lunches are a few of the initiatives we started. We might not be able to end our relationship with plastic, but our operation is cutting every disposable plastic product we can from our daily program.

You might associate an island like Yap as being a farmer’s paradise, but in fact, growing fruits and vegetables is not as easy as you would think. The number of crops that have a continuous and reliable yield is limited to products such as taro, yams, breadfruit, bananas, pumpkins, water spinach, and coconuts. Furthermore, most of the people on Yap grow their own crops in their gardens while commercial farming is only done on a very small scale. 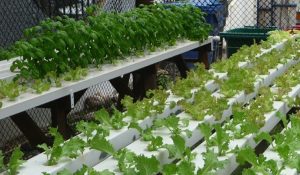 Most of the island’s fruit and vegetables are imported. In an effort to lower our carbon footprint even further, we started our own hydroponic greenhouse to produce salad greens for the restaurant. We have followed that initiative with a larger-scale garden planted with vegetables, fruits, and herbs. The reason is two-fold, use less imported produce and offer our divers more local products. A wide range of products such as sweet potatoes, papayas, cassava, chestnuts, Japanese mangoes, breadfruits, mountain apples, cacao, soursop, jackfruit, bilimbi, moringa, lemon, and calamansi have been planted in this garden. 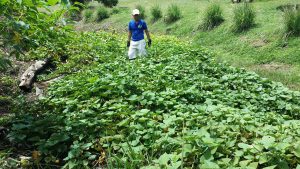 Our organic farm located a short drive from the resort

Spilling our own locally brewed Stone Money Beer is considered a sin, but we reuse the spent grain from the brewing process to make bread, pizza crusts, and various other baked goods.

So, from trying to be sustainable in our electricity needs, to support scientists in their research, to initiating marine sanctuaries for the animals we love to dive with, to growing our own produce, we at Manta Ray Bay Resort & Yap Divers try to contribute to keeping this world and its nature available for future generations to come.