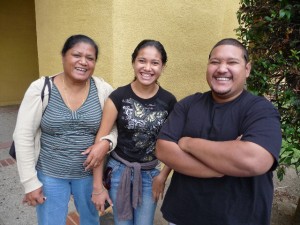 After a short visit, Patricia and I said our goodbyes and drove to Fallbrook where we stayed for two nights in the wonderful home of our good friends Mike and Vikki Musto.  Wonderful people, great house and all in all a perfect beginning to the odyssey.  As much as we enjoyed the afternoon and evening with our friends, we were quite anxious for the 30th to arrive as that would be our first glimpse of our oldest son Nathan which was the entire purpose of this journey.   The 30th was “Family Day” at the Marine Corps Recruit Depot, San Diego, California and what a day it was.  We were joined by Pat & June, Mike and Vikki plus more cousins – Galie, Moran and Bigeg.  We were all excited for our day with Nathan and our first glimpse, during his 5 mile Motivation Run didn’t disappoint.  Fit and looking sharp, “our” Marine was in front of his platoon.  We later learned that this meant he had been meritoriously promoted to PFC during boot camp!  The day just got better and better from there as after Liberty Formation, we got to spend the day with Nate. 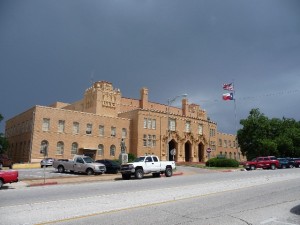 On the 11th, Patricia and I fired up the old hybrid and began a leisurely drive back to California.  We haven’t been alone like that for quite some time, if ever, and it was a very nice trip.  First night was spent in Amarillo, Texas where we were the last customer of the day at a wonderful little Mom and Pop barbecue place where we entertained the proprietors with tails of scuba diving with sharks and life on a Pacific Island.  Sure would like to help them move their business out to Yap as the barbecue was really good.

We spend the 13th traveling from Green River to Las Vegas using I70 and I15 and stopping every couple of miles to take more scenic pictures.  Our option was this drive or the Grand Canyon and since Patricia had been to the Grand Canyon but not to Vegas, we took this and I tell you, the scenery was breathtaking, until you get into Nevada where it is desert and no thought of a rest area on the freeway. 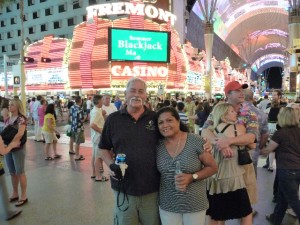 We spent several hours in downtown Vegas enjoying the Freemont Experience light show.  This year it is dedicated to the 40th anniversary of Woodstock and for a guy who was a sophomore in high school during that time, I was very much taken back to my rock and roll roots.  Really good, loud Jimi Hendrix band brought back memories and caused Patricia to do a couple of dances.  A ride along the strip to take pictures of the neon lights followed and then it was dinner at 1 AM. 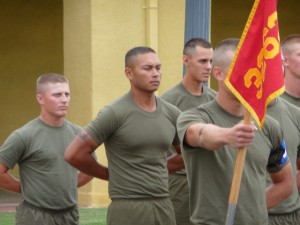 July 31st – Graduation Day.  Patricia and I were joined for breakfast by good friends Roger and Doris Robohm from Colorado and my other “brother” Ron Martin from the LA area as well as my real brother Pat from Rockwall, Texas and his wife June.  After breakfast, we attended the color ceremony where we heard from the base commander, a lady General, who was an excellent public speaker.  The thing I remember most about her speech was a question she asked of all the new Marine mothers in the audience.  She wanted to know what they thought of their new Marine when they first saw them yesterday as all had dropped a minimum of 20 to 30 pounds and replaced this fat with solid muscle.  She then asked the Moms “Did you notice their pants?”  “I did in 12 weeks what you couldn’t do in 18 years”.  Sure enough everyone’s pants were actually at their waste. 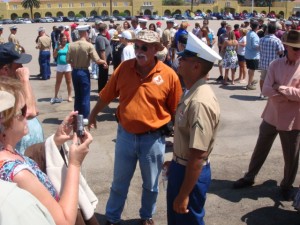 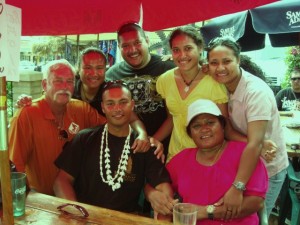 We then moved to the parade deck where we were joined by the Yapese family – Laamar, Galie, Moran, Bigeg, as well as our friends Elon Place as well as Ray and Diana Bullion.  A very moving ceremony with all the new Marines in their dress blues and marching sharply was followed by a day of Mexican food and beer at a place in Old Town San Diego aptly named The Alamo.  The entire gang joined us and we also go to welcome our good fishing friend Mr. Jason Niiya.  They say a picture tells a 1000 stories so you can make your own opinion.

By now, we had a very unexpected surprise as we learned that Nathan would have on-base leave the following day at Camp Pendleton and that the cousins were all in town and waiting to see him.  So, we got up early (crack of dawn at 9 AM) and drove like crazy to join the celebration.  Nate didn’t know we were coming and when we drove on base (both Galie and Laamar are E4 Navy ladies), he received quite a shock to see that big, white, mustache sitting in the rear of the car.  He didn’t recognize his Mom but that’s OK as she didn’t recognize him standing in his camis by his buddy’s pick-up truck.  We not only spent Saturday the 15th with him but he also had part of the day on Sunday so we went back and stayed with him until his liberty was over at 1600 (see how I have picked-up on the language).  It was bittersweet for all three of us to say goodbye this time as we all knew it would be for an unspecified period.  Nate graduates from infantry school on the 8th of September and reports immediately to Ft. Lee, Virginia for 2 months of MOS school.  The future, past that, is up in the air so we have no idea when we will be together again.