Back to Articles
Article List
Home » Artlcles » Love festivals, but hate crowds? Head to the remote island of Yap

Love festivals, but hate crowds? Head to the remote island of Yap

Burning Man. Mardi Gras. SXSW. They’re on every bucket list of not-to-be-missed festivals. But do the crowds make you think twice about going? If you love festivals, but hate making your way through crowds of tourists, head to the remote island of Yap in the western Pacific Ocean where the tourists are minimal and the welcome is maximal.

One of four states in the Federated States of Micronesia, this 36-square-mile island is known for maintaining its traditions and tropical beauty as the daily way of life.

Parading hand-carved items of cultural significance on Yap. The two items on the left are tugaw, ceremonial betel nut pounders. In Yap, growing old is anticipated with a positive attitude. Respect and honor are acknowledged with age. In preparation for aging, a tuguw is given for continued pleasure of chewing betel nut, even when you have fewer or no teeth to chew.

Known as the Land of Stone Money due to the massive discs of stone currency that have been used for centuries as legal tender and are still in use today, three annual festivals take place throughout the year when the culture is celebrated by and for local residents.

On March 1st, Yap Day starts the year off when two days of festivities are set aside to celebrate the unique Yapese culture. Yap Day officially begins with the blowing of the conch shell and a Stone Money ceremony. 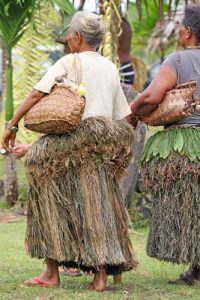 During the third weekend of June, Homecoming Summer Festival brings friends and families together to celebrate the beginning of summer at the Living History Museum in Colonia, the only town on the island.

In early December when the trade winds are most reliable, the Yap Traditional Navigation Society and its respected Master Navigators host the Canoe Festival.

The island’s navigation history and the art of celestial navigation are on display with a parade of hand-carved sailing canoes and canoe races. Demonstrations include bamboo raft making, weaving of traditional canoe sails and the making of coconut husk rope.

Famous throughout the Pacific for the traditional dances that tell stories about the island, its history and people, each festival features dance competitions between villages. A marketplace offers local food and handicrafts.

WHAT TO SEE AND DO IN YAP

During their stay, visitors also enjoy diving among the resident population of manta rays and other sea life in the surrounding protected reef, exploring historical World War II memorials erected throughout the island, hiking the centuries-old stone paths that connect the villages, and identifying the flora and fauna that are found nowhere else in the world. 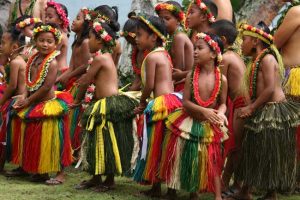 There are only two flights a week to Yap on United from Guam and one flight from neighboring Palau. Accommodations range from economy hotels, an eco-lodge and a small, historic inn to resorts. But with fewer than 180 rooms on the entire island, it’s best to book early especially during festivals.

No visas are required. Despite the use of Stone Money for local trade, the U.S. dollar is the common currency and English is the common language. For more information, visit www.visityap.com