Back to The Manta Blog
Home » The Manta Blog » 2017 Marine Biology Weeks Event Report
Posted by gm@mantaray.com on January 8, 2018

During the 3-day Marine Biology Workshop “basic” we started with fishes, how to identify the families, their characteristics and we dealt with their ecological role. We worked with a reef illustration and “plastic fishes” and also used a species list from FishBase that includes 1070 fish species of Micronesia. Next day´s topic was coral reef ecology, the importance of coral reefs as centers of biodiversity, the overwhelming variety of different lifeforms and their manifold interrelations, as well as the today´s human threats to the reefs by climate change, overfishing, pollution and more.

Coral reefs play a fundamental role for humanity, not only in view of food production, coastal protection, livelihoods, but also as unique and fascinating habitats that have to be preserved. During our dives we collected samples of sand, reef rock and plankton and investigated them under stereomicroscopes. Wow! – even the sand represents a fascinating microcosm, with stunning organisms whose habitat is firstly determined by currents, sedimentation and therefore by the grain size of sand – and of course by food supply. This is where the mangroves and sea grass beds come into play which provide a continuous supply of organic matter…

Thus, we also made a kayak tour deep inside the mangroves – including snorkeling, of course! The mangroves represent an unique ecosystem with multiple important functions and there is a very interesting transition to the adjacent habitats, e.g. seagrass beds, the sandy bottom of the lagoons and the coral reef. We found the shy Archer fish and various other fish, corals, invertebrates and algae which live within the mangroves and sea grass beds.

After those investigations of mainly small marine organisms and their interrelations, we went to the dive site “Vertigo”. Fortunately, nobody experienced `vertigo´, but for the whole dive we had roughly 25 sharks around us. Mainly Blacktip – and Grey Reef Sharks, but occasionally a Whitetip Reef Shark passed along the deeper reef slope. In the thick of it, Two-spot Red Snappers and nearby, two Napoleon Wrasses, groupers, jacks and other “big fish”.

In the evenings we had two presentations about “Coral Reef Ecology” and “Corals – the architects of the reefs”, as well as two nightdives. Here, we observed all those invertebrates which are hiding during the day from their predators, which were sleeping right now until dawn… The coral polyps were fully expanded now and actively feeding on zooplankton that was bustling around in the water column (in fact, it felt like these little creatures were trying to invade our ears…)

One of these dives was a fluorescence nightdive with blue light lamps and yellow mask filters – all corals were glowing predominantly in green, but also in blue, red and even violet! 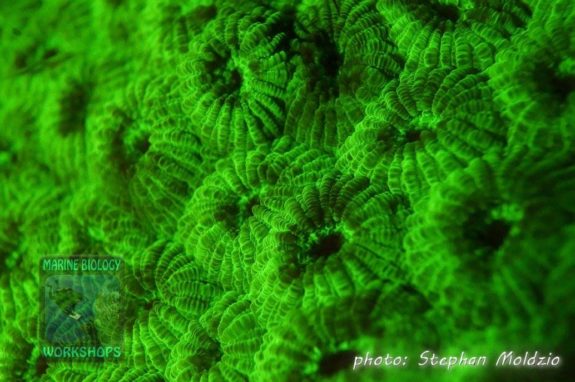 After the ´basic´ workshop all participants carried on with the Coral ID workshop.

In this 2-day workshop, we intensively dealt with corals and the method of coral ID down to genus level along the Indo Pacific Coral Finder authored by Russell Kelley, founder of the Coral Identification Capacity Building Program (CICBP). We took a closer look at their biology, on the process of reef building as well as impacts e.g. coral bleaching, sedimentation, overfertilization, feeding scars from various reef dwellers…

The Coral Finder is the way to tackle the not-too-easy field of coral identification, with the goal to determine any hard coral down to genus level. It is an elaborate visual method, that harnesses our human “eye-brain-supercomputer”, thus it is easy to learn for everybody.

After being empowered to distinguish the different corals from each other, the eye was ready to recognize their specific occurrence in the different zones of the reefs, from the deeper slopes of the outer reef, over the reef flat straight into the lagoons, while some tough species made it as far as to the mangroves…

Finally, on the last day of the first week we gave a small presentation about the outcome of our course to all guests on the restaurant ship “Mnuw”. We projected some pictures from the workshop on the big screen and our Reef Illustration with the fish species we had observed during these 5 days was displayed in the hotel foyer. 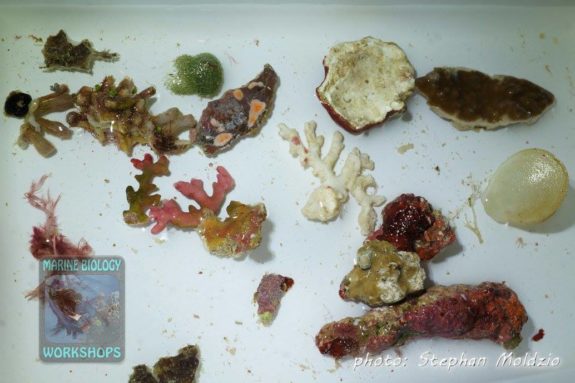 Within the second week we had another 2-day workshop.

On the first day we started again with fishes and the reef illustration, as well as microscoping of sand, reef rock and plankton samples. On the second day we had a quick snapshot into the work with scientific databases, using the example of FishBase how to learn about fishes, how to gather informations about species and families and their ecology, and how to draw up fish species lists for any region of the world. With this tool, you can prepare yourself for the underwater world BEFORE you go into the water during your next diving holiday. Of course, this is a bit too much for only one day, but the participants have received the workshop materials to deal with these topics by themselves further on.

We also did a Fluorescent nightdive again, here we came upon a big crab which was busy just to pinch off one arm of an unfortunate blue sea star. Later on we saw another sea star, obviously intact, with only four arms…

At the dive spot and cleaning station “Stammtisch” we encountered the impressive Reef Manta Rays (Manta alfredi), who regularly visit these cleaning stations inside the lagoon beyond Mi´l Channel. But we have also had many other remarkable encounters: At the dive spot O´Keefe´s Passage a Bat fish felt so attracted by us, that it followed us for more than 20 minutes!At Lionfish Wall, a big male Bumphead Parrotfish came very close, encircling one of us for two rounds and slowly swam further down the reef wall… At dive site “Vertigo” we observed one sharksucker jumping over from one grey reef shark to a black-tip reef shark and back – just as if it had accidentally taken the wrong bus line… 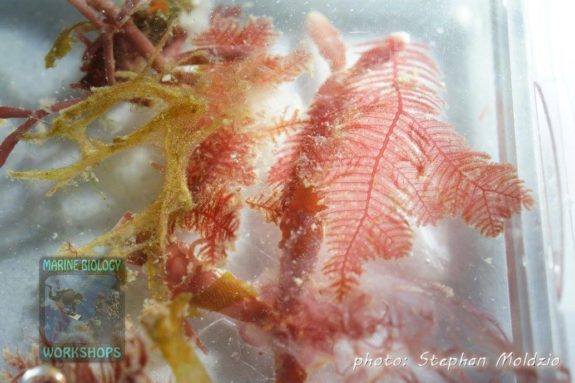 These are only a few examples cause this is beautiful nature and you will always get surprised when you dive along the amazing reefs of Yap!

A big THANK YOU to all very active and motivated participants (you were really great!! :-), to the top guides from Yap Divers and the excellent support, infrastructure and logistics of the MRBR staff!

P.S.: Check out these fish species occurring around Yap: https://www.facebook.com/pg/MarineBiologyWorkshops/photos/?tab=album&album_id=1632289843501647